Malalai of Maiwand- Pashtun heroine of the Second Anglo-Afghan War 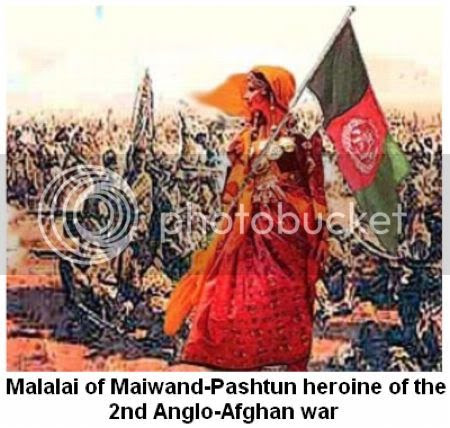 July 27th 2010 marks the 130 th anniversary of the historic Battle of Maiwand, a battle in which a brave young Pashtun girl name Malalai lost her life. She was a native of Khig, a tiny village on the edge of the Maiwand battlefield, and the daughter of a shepard. Both her father and fiance joined with Ayub Khan's army in the attack on the British on that day (which some say was also her wedding day), and like many women, Malalai was there to help tend to the wounded and provide water and spare weapons. Eventually there came a point in the battle where the Afghan army, despite their superior numbers, started to lose morale and the tide seemed to be turning in favor of the British. Seeing this, Malalai took off her veil and shouted out:


"Young love! If you do not fall in the battle of Maiwand,
By God, someone is saving you as a symbol of shame!"


This inspired the Afghan fighters to redouble their efforts. After one of the leading flag-bearers fell from a British bullet, Malalai went forward and held up the flag (some versions say she made a flag out of her veil), singing a landai:


"With a drop of my sweetheart's blood,
Shed in defense of the Motherland,
Will I put a beauty spot on my forehead,
Such as would put to shame the rose in the garden," 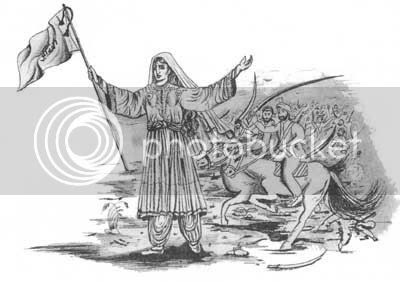 But then Malalai was herself struck down and killed. However, her words had spurred on her countrymen and soon the British lines gave way, broke and turned, leading to a disastrous retreat back to Kandahar and the biggest defeat for the Anglo-Indian army in the Second Afghan War. Ayub Khan after wards gave a special honor to Malalai and she was buried at her village, where her grave can still be found.


British sources, unsurprisingly, do not mention Malalai. Her actions may not have been noticed by any of the British, or they may not have seemed as consequential as they were to the Afghans. Afghan women are very rarely mentioned at all in the reports and narratives of the war (Hensman mentions that one woman was found among the dead at Ahmed Khel). Interestingly, it is the Afghans who provide some of the evidence for one of the other legends born at the battle of Maiwand, as it is from one of Ayub's artillery colonels that we learn some of the details of the famous last stand of the 66th, clutching to their company colors, in a Khig garden, where indeed the fallen bodies were later found to be lying.


As well as Malalai, there were many other factors in the Afghan's favor on that day, including preferential terrain and positioning, superior numbers, skilled use of outnumbering artillery, and perhaps some bad decisions on the British side of things. But certainly her actions were enough to turn her into a national hero where she is still revered today. Many schools and hospitals have been erected in her memory and to this day Malalai is also a very popular girl's name in her native land. Malalai, the brave Pashtun Afghan girl who gave her life in defense of her homeland, will never be forgotten. Last year I was inspired by her memory to write the following poem:
"Our Children Will Ask Us"

No Pashtun male ever wants to be made to feel dishonored or ashamed
But if they do nothing, like cowards, for our condition they will be blamed

We are their cherished mothers, their sisters, their daughters their wives
For their familie's honor we know they would gladly sacrifice their lives 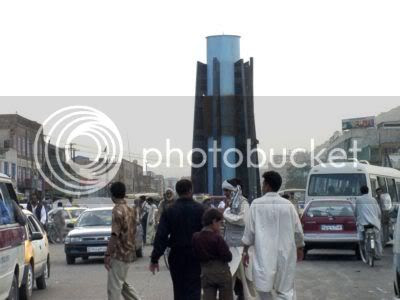 This monument, Minar-i-Maiwand, commemorates the battle fought between the British under General Burrows and the Afghans under Sardar Ayub Khan, at Maiwand, 45 miles from Qandahar, on 27 July, 1880. The column was erected by His Majesty King Zahir Shah in 1959. The inscription on the monument is the Pashto words Malalai said that day to inspire the Afghans to victory. 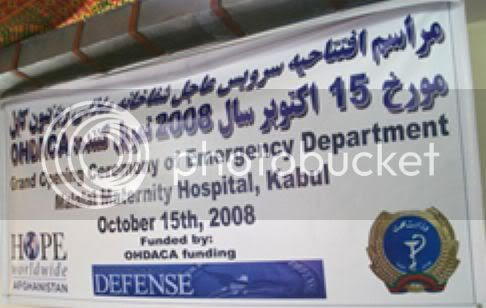 A sign outside of  the Malalai Maternity Hospital in Kabul.

Portions of this article were taken from an article by Garen Ewing on this website http://www.garenewing.co.uk/angloafghanwar/biography/malalai.php
Posted by Mariam